Why You Won’t See us Producing Christmas Content this Month

It’s December, that means we better be prepared for a horde of ‘slightly related to the brand if you squint and look at it sideways’ Christmas content. This phenomenon happens not only every Christmas but during any big seasonal event, as so amusingly pointed out this Halloween by parody Twitter account AdWeak;

I understand, as a digital marketing agency, or anyone producing content for online viewing, it can be so tempting to jump on a seasonal trend. Everyone is talking about it, journalists are writing about it and consumers are actively looking for content on it. This is normally the golden trio of reasons to create a piece of content!

However, the rules are slightly different with these huge seasonal holidays, especially if they centre around a particular date or few days such as Halloween, Christmas or even the Superbowl. With Christmas in particular, there is a very fine line to tread when it comes to what, if any, content you should produce.

Before I get too negative and list all the reasons you shouldn’t jump into a Christmas piece, I want to highlight that it can and has been done well and with some success.

Take this piece from our own back catalogue. Kaizen created a London Christmas Map for credit card providers Marbles in 2016. The piece did very well with over 20 authoritative links on UK, London and European publications over the holiday period, including CityAM, ITV and TimeOut. 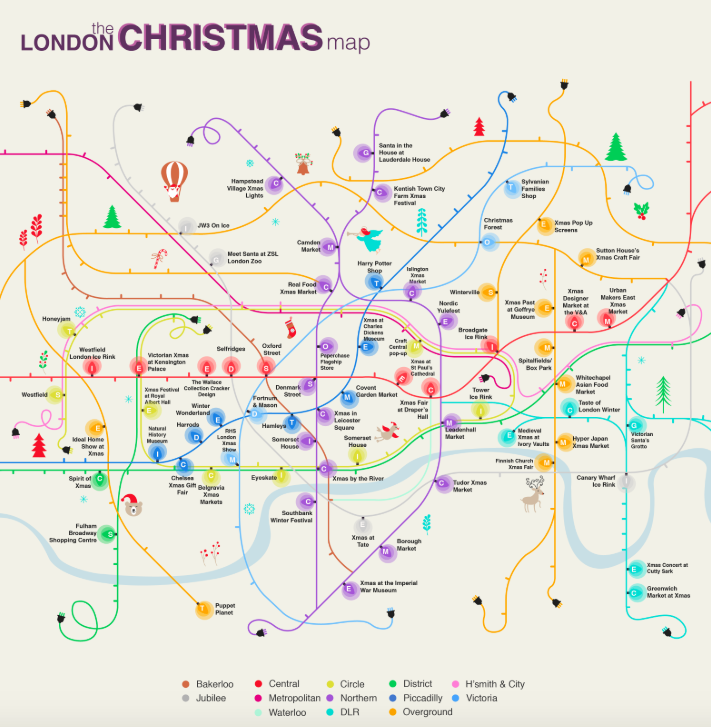 One of the reasons this piece worked so well was that we gathered the data and began outreaching in November. One of the biggest mistakes marketers make when doing seasonal pieces is that they have the idea too close to the event, scramble to get it together and end up sending it out 2 days before, with no time to pivot their outreach methods if it doesn’t get picked up instantly.

This piece also sticks pretty well to our Golden Rules of Content – which we didn’t even have in 2016 – because it answers a question that people are actually asking, ‘where are all of the Christmas events in London this year?’. On top of that, this is is also a very practical piece as it is laid out in the style of the tube map, so when people have picked their event, they can easily find it.

So, why am I not recommending that everyone do this? Whilst we had a great piece of content and were smart with the outreach, there was also a certain amount of luck involved in the success of this piece. If it hadn’t gone as well, for the reasons discussed later, then we would have had no backup plan. We couldn’t pause to re-think and try again in January as the main event would have passed.

There are 3 main reasons to think twice before you put on your Christmas content hat this year; saturation, delays and evergreenness, and I’ll go into each in a bit more detail.

You’re coming up with content ideas for December, you think ‘hey, it’s Christmas, I’ll do a Christmas campaign’, do you know who else has had the same thought? Pretty much everyone that creates any kind of content!

Journalists are often looking out for relevant content around the holiday season but they get sent so much of it, it’s often difficult for them to ever pick out a decent piece from the noise. Unless all the stars align for you, it’s quite likely that your pitch email will go unread, or even if you manage to break through and get a journalist to look it, the content may end up on the bottom of an ever-growing pile of Christmas pieces that may or may not end up being published.

Delays are an unfortunate, but inevitable, part of most content creators lives. This could be a delay in:

Normally any of these delays are annoying but manageable, however a delay or even multiple delays on a piece linked to a certain date can be catastrophic. No-one’s going to publish your piece on Santa’s favourite brand of cookies on the 28th December if that’s when it finally goes live.

At OutREACH conference this year, Stacey MacNaught spoke about how content campaigns should be able to keep working for you months after the initial launch. At Kaizen, we always try to produce content that can be outreached throughout the year, particularly when an event in the news cycle triggers interest in the topic again.

For a seasonal campaign, you simply cannot do this. Once the event is over, it’s over, and so is your window for outreach until the next year. And that’s only if it’s a recurring annual event; this is even more true for a one-off, such as a royal wedding.

If you’re going to create content that can only get picked up for a couple of weeks out of the year you should be very confident that it will perform as well as a piece that could be re-outreached throughout the year.

Don’t Put All Your Baubles in One Basket

One way to jump on the Christmas PR sleigh without running into the above issues is to create a general winter-themed piece and use press releases to fake-it as a Christmas piece. Last year for Crystal Ski, part of the  TUI group, we created a piece on Winter Drinks from around the world. 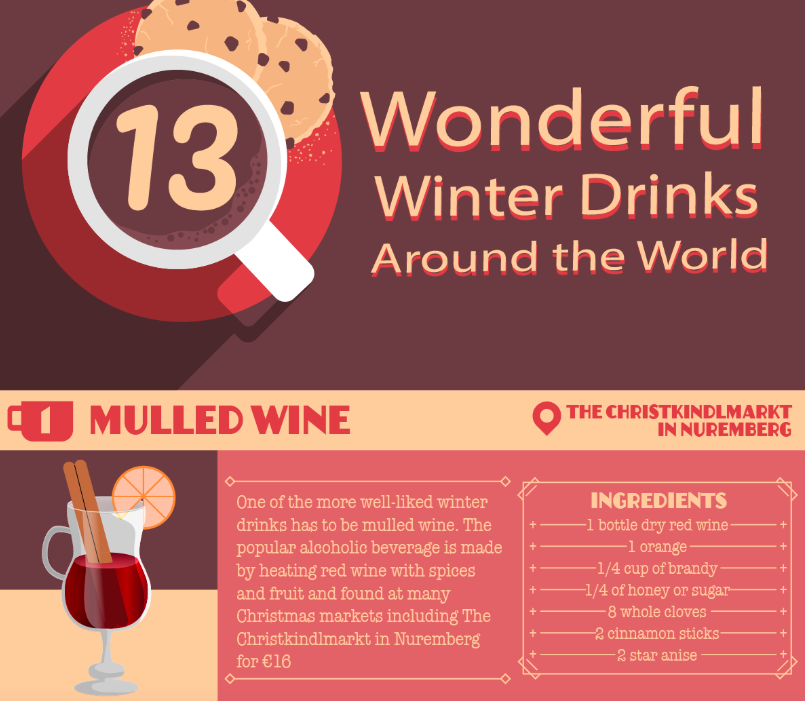 As this was a winter piece we were able to outreach it and gain coverage from around October through to February, and as it’s evergreen it can be pushed out again this winter too. However, a lot of the coverage we got from this piece was in the run up to Christmas and was included in Christmas themed content, such as; 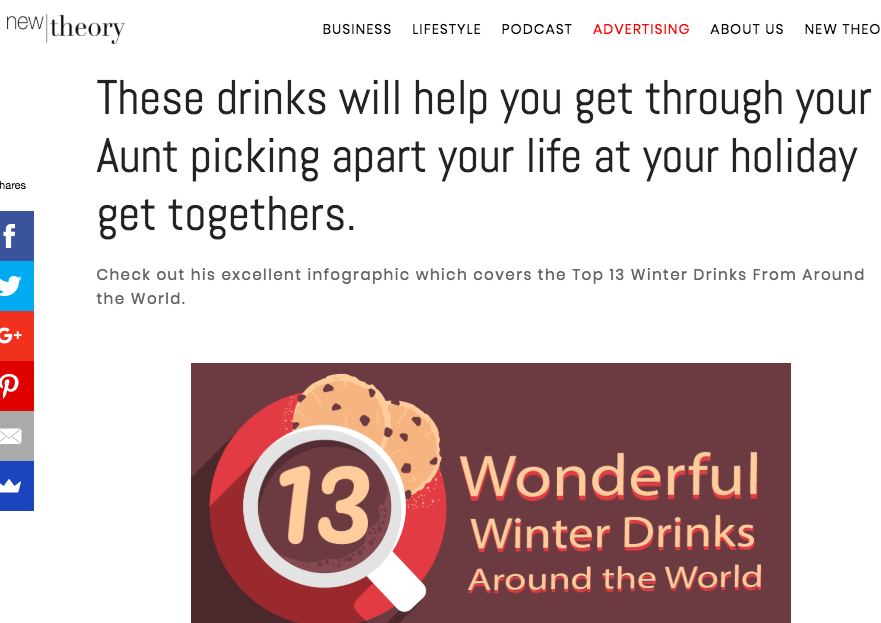 We sent out a Christmas-themed press release and gained the interest of those elusive journalists open to new Christmas content. However, we did not gain the number of links we would be satisfied with from this press release alone. If this had been a Christmas piece that would be the end of the story. A failure until possibly next year. But this was a winter-themed piece so when everyone was back in their cold offices in January, they were still interested in talking about wonderful winter drinks.

This same theory works for the other seasons too: think Autumn instead of Halloween, Spring instead of Easter and Summer instead of 4th of July!

Finally, the best content pieces are often those that have no ties to any season. The truly evergreen pieces that are as relevant in July as they are in November. I would always recommend creating pieces in this way where possible.

Using the above principles, an evergreen piece can often become seasonal with the right press materials. Any pieces that you’ve created about consumer spending, family relationships, board games, Bond Films…the list goes on, can easily be tied into Christmas with a clever press release.

And if your Christmas news hook doesn’t work? At least you’ve got 364 more days of the year to find something that does.

We recently hosted our second Digital PR Linkup, where we enjoyed some great lessons from a number of speakers as well as a panel of seasoned journalists. But alongside opportunities to learn and network, we were also delighted to be able to announce the launch of Kaizen’s new tech product, Klipr. Klipr – Automated PR […]

Three Journalists Share their Top Tips on How to Land Coverage

Last week, we hosted the second edition of our Digital PR Link-Up, which aims to create a space for people in the digital PR industry to gain new insights and build valuable relationships. As part of our evening, we hosted a Q&A panel with journalists from some of the UK’s most recognised publications: Alistair Charlton […]

What Digital Channels Will Work For My Business?

An emarketer report forecast that UK ad spend would surpass £19.5bn in 2019.  Even with Brexit uncertainty, it looks likely to exceed that milestone by the end of the year, with over 66% of that to be in digital media. This reflects the scale in which advertisers are investing in digital channels to promote their […]