Existing somewhere between the realm of social network and search engine, Pinterest boasts a unique opportunity for content marketing. CEO Ben Silbermann labelled the company as a ‘catalogue of ideas’, which is becoming increasingly valuable in bridging the gap between users and brands.

With over 175 million monthly users, the online scrapbooking service is no longer an understated contemporary of Facebook, Instagram and Twitter but an instrumental tool for content marketing. By looking at some of the driving factors behind the growing success of Pinterest, it is then possible to see how brands are now capitalising on this. 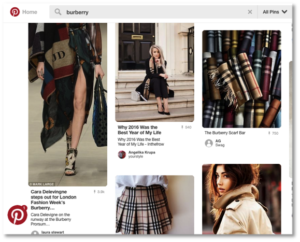 For those who are not familiar with Pinterest, the idea is simply that users share their own interests through the use of personal boards. The site leads people on a path of discovery, allowing people to find and share their own interests in things like it food, interior design or photography. Through the content of other profiles and their own searches, users can put ‘boards’ together that categorise their own tastes for others to see. Every month over 2 billion searches take place, and in 2016 it was found that 97% of searches were non-branded for inspiration on wedding ideas or dream holidays. This not only provides advertisers with a substantial foundation of prospective consumers, but also allows them to exploit upper-funnel commercial intent.

Earlier this year, Pinterest began the process of partnering with predominantly e-commerce companies testing new Search campaigns, in the hope of taking advantage of the existing market. An estimated 87% of users claimed to have made purchases because of Pinterest itself, therefore the presence of advertising at what is essentially a ‘window shopping’ stage is an invaluable tool for brands like Etsy, L’Oreal and Sony. The onus is then on the marketers themselves to provide content that synchronises with user-designed material that already exists on the site. 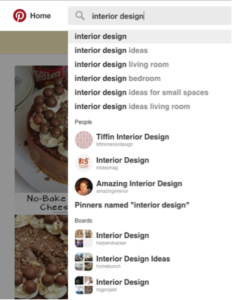 The most fundamental point that separates Pinterest from other sites as an effective marketing tool of influence is how it is formed around visual content, and not people. This is not to say that individual influence does not exist, but that the inclination towards high-quality content is undeniably positive for brands such as Reiss and Hunter.

The search campaigns Pinterest have recently started undertaking have fixated much of their attention on the relationship between users and visual content. This ranges from the users own use of keywords in searching, to how they use keywords to document their own material. For leading brands in fashion and food, this can gain repeated benefits as they base their own content around user behaviour

The key difference is rooted in the visual nature of Pinterest’s content marketing capabilities, which distinguishes itself from sites like Facebook and Twitter. Both immediately and in the long-term, Pinterest offers a unique space for content marketing through infographics, videos and photographs. The instant effect is how the visual characteristics allow it to be processed quickly and more organically by the consumer. Then, once a ‘pin’ is created its existence is far more prolonged than it’s faster-moving competitors thus creating a slightly higher ROI (return-on-investment).

As previously discussed, Pinterest differs from other social networks and sites on the basis that users follow content rather than individuals. The site has created a brand-image of authenticity that doesn’t engulf users with hard-selling advertisements.

Individuals as well as brands on Pinterest command a level of authority by reflecting both the image of the site and the relaxed attitudes of the consumer. For example, people like designer Joy Cho with over 12.5 million followers have a broad but specific reach in that her huge following bases predominantly around design-based content. In order for a brand or product to be given any recognition from an influencer like this, their interest is crucial.

A trying conflict for Pinterest, and indeed any major online platform, is their relationship with advertising and how that can intrude on the site’s aesthetic. How does a site of such boundless creativity act as a middleman between user and brand whilst maintaining credibility? 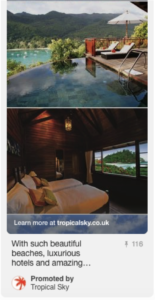 A mainstay of Pinterest’s guidelines surrounding advertising is that the tone tries to mirror that of the content generated by normal users of the site. This attempts to help the ads blend with other pins found on the site, which does in turn demand more consideration from companies looking to outreach across many forms of social media. Forcing brands to essentially reflect their customers can actually be seen as a more positive approach to marketing. Companies are able to combine innovative ideas with the useful trend information previously discussed. This can be as simple as designing pins with mobile/tablet compatibility in mind as it is where 80% of Pinterest usage takes place.

The principles that Pinterest encourage can actually transform the creative approach of a brand in how they make efforts to assimilate their content. While many companies are being forced to adapt their own customs, it is a necessary step to take advantage of the 2 billion searches made each month.

The recent developments in Pinterest’s approach to advertising are permitting a more natural form of marketing. Exploiting keyword searches, extending the benefits of customised visual pins used by the likes of fashion brand Burberry and new search campaigns are helping brands influence a vast base of consumers. The task now is for companies to modify old habits, and adapt their content to fit the mould that Pinterest and their users have created.