Bill Gates predicted the rise of content back in 1996 when he announced that “content is king”. Gates believed that much of the real money made on the Internet would span from here, and while he may have meant in a more traditional sense that entertaining content online would take over the traditional print and broadcast space, his words resonate in the world of marketing. In fact, in 2016 a study by The Content Marketing Institute found that 88% of B2B marketers were found to be utilising content marketing as part of their strategy, with 76% saying they planned on producing even more in 2017.

We’ve looked at some of the key content marketing trends for 2017 so far and how brands have made them work as part of their marketing strategies. Below are five of our top trends for this year and the advertisers we have seen paving the way for others:

The growth of mobile is nothing new. However, with 51% of Internet consumption now occurring on mobile devices in the US compared to 42% on desktop, mobile is a trend that’s here for the long haul. In this day and age, it is more important than ever before that brands are producing mobile-optimised content to ensure the success of a campaign. After all, the likelihood is that this is the platform it will be accessed from.

Utilising the benefits of mobile also works hand in hand with other content marketing areas, for example interactive campaigns become accessible anywhere, VR campaigns are brought to life through tools such as Google Cardboard, and video campaigns become interactive. As content marketers, it’s more important than ever that we think of mobile not only for apps and games, but as a tool to bring all of our content to life in new and innovative ways. The power of the smartphone makes it possible to put the client in the forefront of the consumer’s mind and attract users in such a way that they choose to engage with the ad rather than feel disrupted by its presence.

One such example of this can be seen in Nissan’s engaging interactive video content campaign. The video, featuring a Nissan SUV battling snowmen in a snow-clad

city, was equipped with interactive hotspots throughout the advert where a user could tap the screen to find out more about the car and its various features. This simple inclusion of interactivity, made possible by the smartphone technology of today, resulted in an impressive 78% completion rate of the video and a 93% engagement rate, despite the interactivity purely revolving around uncovering more specific details on the car model being sold.

In recent years, Virtual Reality (VR) has been the trend on everybody’s lips. For those yet to experience it, virtual reality refers to an artificial environment that is created by software and experienced by users (most often through a VR headset) in a way that makes the user feel as though the virtual environment is real. Hand in hand with the growth of smartphones this technology is far from a futuristic ideal and much more an immersive reality.

But is it just a fad? It doesn’t look to be that way – Business Insider has estimated that the VR hardware industry will be worth £1.9 billion by 2020. In addition to this, Magnifyre found that 29% more people viewed a 360-degree video than the same video in a traditional format, offering the opportunity for brands to create more engaging content than ever before. When considering using VR within your content marketing strategy, it’s important to remember that although VR is a growing trend this does not mean that it should be thrown into just any campaign. VR requires a piece of content with a story line to follow or an environment to explore and doing it well is an expensive endeavour. 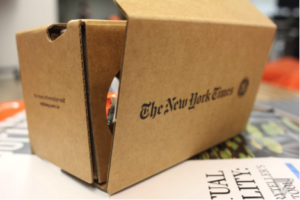 One of the most effective examples of the use of VR in recent times can be seen in New York Time’s collaboration with Google Cardboard, giving their subscribers the chance to experience hard-hitting humanitarian news stories in an immersive environment, placing the user in the centre of the crisis through the power of their smartphone. The campaign was extraordinarily well received and has been acclaimed across the industry since as an example of VR done right.

From Buzzfeed-style quizzes to viral social polls, people love to get involved. More and more, users want to actively participate in the content put in front of them, not just passively consume it. Interactive content not only encourages engagement with the content piece, but has also been shown to improve brand recall – contributing to overall brand awareness KPIs. Research from The Content Marketing Institute lays it out clearly – 81% of marketers surveyed agree, “interactive content grabs attention more effectively than static content.”

Kaizen is no stranger to the power of interactive content. We often create interactive and shareable pieces to reflect our clients’ needs, gain coverage and engage users. One particularly effective example of an interactive content campaign we have created recently is a piece on London Commuter Hotspots for TotallyMoney.com. Allowing users to find the ideal location for them to live based on their desired commute to work, the interactive heat map tool factors in everything from commuting time to season ticket costs and the towns’ life satisfaction ratings to help the user find their ideal place to live out of 89 commuter towns. Overall the campaign earned 70 pieces of coverage, 69 of which were followed links, and 6,539 social shares.

With the growth of platforms such as Snapchat and the ever-growing presence of live video content, video has become a core part of the Internet browsing experience. Research from Cisco predicts that, by 2021, 81% of all consumer traffic online will be attributed to online videos and brands are getting involved. Mark Zuckerburg is quoted as saying “I think video is a megatrend, almost as big as mobile”, and it’s easy to see why. Videos allow information to be conveyed in an accessible and entertaining way and are one of the best ways for a brand to engage with users on an emotional level driving a deeper relationship between the brand and the consumer. Based on current trends it seems that to give the people what they want we should be providing quality video content with the power to go viral.

When integrating video into your content strategy it is key to remember that in order to spread video needs to be a platform for a story, not a sale. An overly sales-focused messaged will not emotionally resonate with an audience in the same way that a strong and shareable narrative will. Video length is also a factor to be considered; with one fifth of viewers clicking away after the first ten seconds, the video should aim to hook viewers within this time and ideally should be kept short and to the point overall.

A great example of an effective video marketing campaign can be seen in the Always #LikeAGirl campaign. Adverts for feminine hygiene products in the past had never been the most engaging pieces of content on the web. That is until Always stepped up and used their platform to create a video marketing campaign which highlighted the problem with using the phrase “like a girl” as an insult. The empowering campaign went viral and has been widely praised since, receiving an Emmy, a Cannes Grand Prix award and a Grand Clio award.

The rise of the influencer has emerged over the past few years, and with the method viewed as effective by 94% of marketers in a recent study by Linqia, it looks as though they are here to stay. From producing sponsored videos, to promoting products and brands via social media channels, influencers have the power to do just that – influence the buying decisions of the public.  Growing from the trust that comes with personal recommendations, an influencer’s audience base relies on their endorsements. Putting their name on every product or collaborating with every brand, as is often seen with reality TV stars, is not an effective way to keep this trust. Rather, when working with influencers it is important to choose those who have a connection with the brand or a real interest in the product to see the most effective results. Essentially, the public are now wise to these types of campaigns and relevance is key – if the audience feel they’re being used to make some quick money rather than being shown something the influencer in question truly cares about they will be far less likely to engage.

Although it may seem that this channel is best fit to those brands sat within the cosmetic and fashion industries, it has become apparent in recent times that these are not the only advertisers that can benefit. One such campaign was activated by National Geographic, who utilised Instagram and influential photographers to connect emotionally with their audience and engage them in the stories of some of the world’s pioneering women of today.

The brand’s campaign “Make What’s Next” launched on International Women’s Day 2016 to encourage young girls to study or work in STEM (Science, Technology, Engineering and Mathematics). On the day, National Geographic utilised 30 photos taken by influential wildlife photographers featuring prominent female scientists and adventurers and posted them across the brand’s five Instagram accounts. The photos were met with a wildly positive reaction, garnering over 3.5m likes and successfully creating a shareable, viral influencer campaign beyond the traditional.

What are your thoughts on these content trends for 2017? Are they here to stay or soon to be forgotten?

All sources available on request.