In an industry where journalists are receiving hundreds of emails, tweets and calls a day, it can seem rather daunting when trying to be heard in a crowded room. Every element to your outreach strategy needs to be on point, however, the first touch point you will have with a journalist will be your email’s subject or press release headline – which ideally needs to radiate that ‘clickability’ and shareable factors.

Many within the marketing industry have illustrated the importance of quality headlines. For example, in a study by CoSchedule, it was revealed that 8 out of 10 people will read a headline yet only 2 out of 10 will actually click through.

Founder of Ogilvy, David Ogilvy also believed in the importance of one’s headline, in stating that “on average, five times as many people read the headlines as the body copy. When you have written your headline, you have spent eighty cents out of your dollar.”

So how exactly can you make your headlines clickable and shareable? We’ve discovered the top 7 tips and tricks to include when writing your headlines.

Everyone Loves a How-to Guide

When creating a few headlines for your outreach emails or press releases, it would definitely be beneficial to take a look at how someone might search for that particular content on the web, especially during a Google search.

One of the formulas that works well with the majority of people would be asking a question in the search for possible solutions, e.g. How-to guides etc.

A recent Kaizen study delved into the analysis of travel content and found that one of the words used in the most shareable headlines included the words “how” – with the highest reliability in URL Ratings and Social Shares (11 and 10 respectively), as well as the second highest on referring domains.

While Quirky is Fun, Ensure Your Headline Relates to Your Content

There’s nothing worse than getting excited over something, only to be disappointed or misled. While clickability is key when writing the perfect headline, you need to also remember that you can’t mislead the journalist and it needs to relate to your content – you could stand the risk of annoying the journalist and putting them off completely.

On the other side of the scale, confusion is also a risk when writing the perfect headline. Making it too complicated or confusing can distract the reader or journalist altogether and waste that important 15 seconds that a user will focus on your content.

Also, remember to apply the headline to your niche specifically. For example, if your angle is aimed at financial publications, include figures and data to ensure that you will grab the journalist’s attention by keeping your pitch or press release as tailored as possible.

Best Phrases to Include When Writing Headlines

One of the most important goals of any content creator is the aim of ensuring your work is sharable. When content is shareable, especially on social media, you’re not only opening new avenues for constant, evergreen coverage but also provide journalists with an incentive to cover the content – more shares equate to better results for their publication too!

A Buzzsumo study from 2017 analysed 100 million article headlines, in the hopes to gain a clear indication of a winning combination.

While analysing social media engagement and top phrases used, the study found that “X reasons why” proved to have the best results with over 5000 facebook engagements – also highlighting the fact that numbers do play an interesting and effective role when included in headlines.

Numbers are a way to simplify but also provide a logical order to content that our brains are attracted to. Listicles also prove to be an easy way to absorb information quickly. 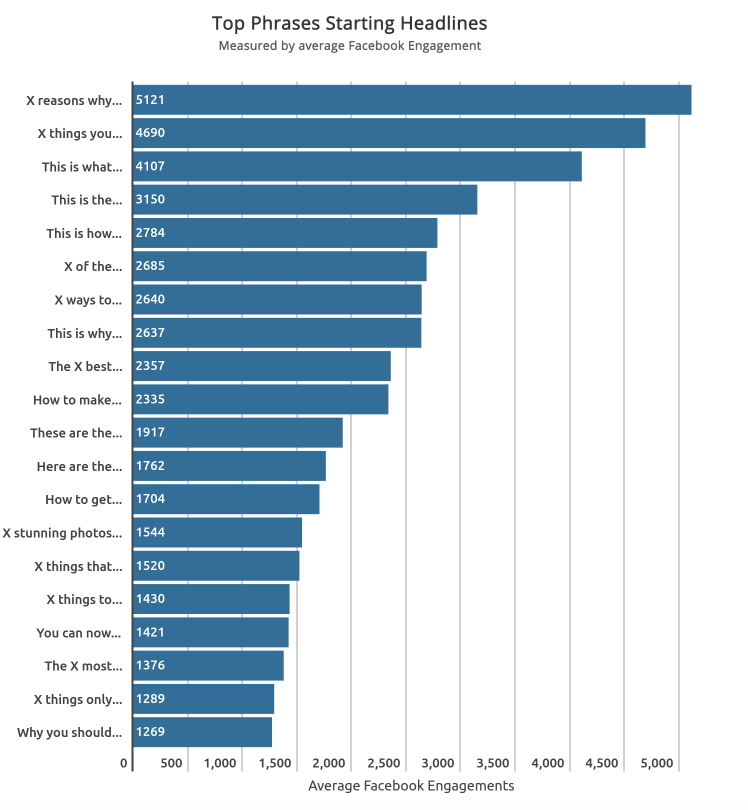 The Patterns of Your Headline

Another study by Buzzsumo in 2016 analysed the Most Viral Posts, taking a look at the headlines used.

Majority of the posts created, mainly in somewhat of a Buzzfeed style, included 3-5 different elements to them – emotional, content, topic, format and promise element.

For example, one of the headlines used within the study was a BuzzFeed headline, which received over 650,000 shares and 2.6m views.

This combination of elements within the headline ensures that readers fully understand the breakdown of the content. Especially with limited time or attention span, understanding exactly what you’re about to see will save a lot of time and have less confusion.

Superlative words also have been found to relate more to users, especially negative superlative words, which overall perform 30% better than positive words. For example, these include words such as ‘never’, ‘worst’ and ‘nothing’.

It is also revealed that readers only focus on the first and last three words of a headline, so remember to keep those emotive and important elements either at the beginning or end of your headline.

Enforce a Sense of Urgency on Your Readers

One of the oldest marketing tricks in the book is enforcing a sense of urgency, especially within your headlines.

By enforcing urgency, the user feels a sense of “fomo” or fear of missing out and by informing readers how or why to do something, it creates a further sense of risk. Providing a personal element to your headline will also make the reader feel included.

Throughout a few studies, it has been revealed that questions also provided an inclusive angle with readers and generated quite a bit of feedback on the content. Conversation points are also great incentives for journalists as this often relays to further engagement and have a viral potential on social media. 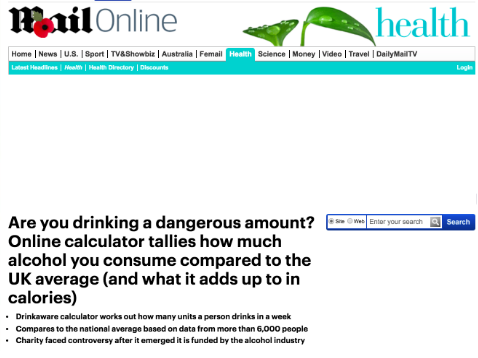 It was also revealed in a TrackMaven study that looked at over a million blog posts, nearly 95% of headlines did not contain a question mark, however, those that did include one accounted for over 46% of social shares for that specific niche or data set.

Take Time Over the Smallest of Details

When putting together the final touches on your email templates or press release headlines, it’s always best practice to take into consideration the finer, usability details to your subjects – especially the tone it may portray and the visual attractiveness.

It does sound silly – however – when Moz surveyed their users on headline capitalization preferences, respondents were shown the following headlines and asked which they preferred 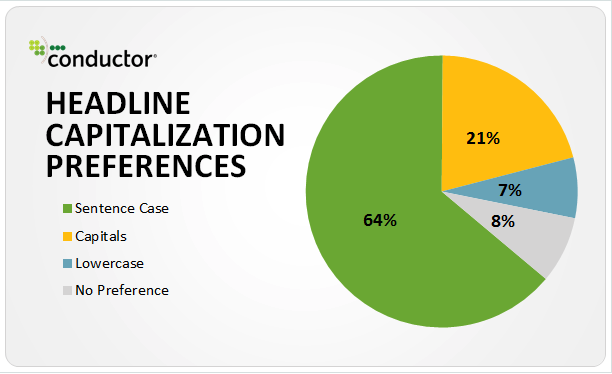 The results revealed while capitals did respond well to 21% of those surveyed, the majority preferred the more traditional sentence case, with an overall of 64% preference.

While at Kaizen we strongly advise A/B testing your headlines in emails and press releases across different niches and publications, these are just a few tips and tricks to incorporate into your testing to get the best results possible – leading in viral and shareable coverage.

Have any additional tips and tricks for shareable and clickable headlines? Get in touch!