Perfecting the Art of Press Releases

Press releases: every link building or PR campaign needs one. They can be the difference between securing a piece of coverage for your content and getting discarded in a journalist’s inbox. But how do you ensure that your press release gives your campaign its best shot at success?

Your title should call out what you see as the main and most interesting story your research has highlighted and grab the journalist’s attention. The title should be a maximum of two to three lines and should draw in the journalist to amplify their interest in the story. Getting clever with language in your headline, as though it were the headline of a front-page article, is also a great way to ensure prospects read on and helps the journalist to picture the piece as a finished article.

Summarising the key findings into three bullet points or a brief sentence under the title will give the journalist a quick snapshot of what your research was about, if it’s a piece for them and if they can see a story from it. This is your chance to outline the key points that you want the journalist to see, even if they don’t get any further, and hopefully to peak their interest in the rest of the release.

The paragraph that follows should summarise who the brand is and provide an explanation of what the research is and the reasoning’s behind it. Why is the brand telling this story now? It is also important to include an overview of your methodology. After spending weeks researching, designing and pulling together a piece of content, it can be easy to forget that others won’t know how you conducted your research or may have some confusion about how you drew your conclusions. Including this information early on will hopefully stop you from having to fend off the same questions over and over again later on. 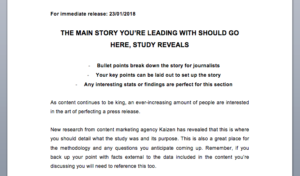 Give Them The Story

Spelling out the story from your title and the angles within it will make it as easy as possible for a journalist to cover your research. Including bullet points within the body of the release that break down the most interesting points is also a great way to get this across in a way that doesn’t look too daunting. For example, if your research has revealed the best cities to live in the UK, then listing the top and bottom three in bullet points and pulling out the factors that affected their position in the ranking is a great way to break down the story for journalists.

Further to this, it’s also worth remembering that for a piece of content that lends itself to multiple angles it may be a good idea to split out the stories to multiple press releases for different journalists to keep things relevant and improve chances of pick-up.

Quotes That Do The Most

For most content , there will be a level of relevancy between the topic and the brand that makes them a trustworthy source for this data. Including a quote from a relevant and authoritative contact gives the journalist something they can include in their piece to back up the point they’re making.

Journalists receive countless press releases weekly. Unfortunately, this means that they often won’t have time to read through a hefty press release. Keeping things short and sweet and focusing on the points you really want to get across means that the journalist can easily get to the root of the story, and improve your chances of successfully gaining coverage or links.